This is the first of a series of articles written by the Red Rock Lake Association’s “Save the Lake Committee”, by Mark Thompson

When European settlers first arrived in what is now Iowa, they encountered a vast sea of grasses and flowers, with scattered woodlands bordering the many streams and rivers.  The north-central part was dotted with numerous wetlands, holdovers from the last glacial event in the state.  Over 85% of the state was a prairie landscape that was described as a place rich in form, life, and color, and a mecca for wildlife.  The first settlers assumed that if the majority of the land was too poor to grow trees, it was surely too poor to grow much in the way of crops. For a long time, homes were built in the wooded areas and the forests were laboriously cleared as they were back in Europe.  They failed to see that trees grew on the prairie’s poorest soils, a thin veneer of fertility that would erode over time when there were no longer trees to stabilize it.  In central Iowa, as late as 1847, prairie was selling for $3 to $10 per acre while timberland sold for $30 to $50.

In spite of the prairie’s strangeness and struggles, pioneer families soon found that it was where the action was.  They left the trees, built sod houses and soon began to find out what the land really offered – deep fertile soil.  This legacy was developed by the deep penetrating roots of the prairie species and was responsible for development of a thick, black layer of topsoil – Iowa’s “Black Gold.” 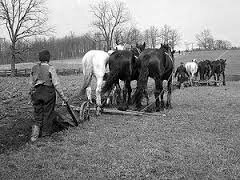 Had they known the world’s most fertile soil lay under these grasslands early on, it would have made little difference.  There were no tools available to the new settlers that could be used to plow through the thick prairie sod.  Soon, there were plowmen who would break your claim for $12.25 per acre with a “breaking plow” a huge device drawn by five yoke of oxen that cut a furrow three feet wide.  The moldboard was seven feet long.  A giant breakthrough came in 1837 when a fellow named John Deere from Illinois invented his new prairie plow.  It was a walking plow that could be drawn through the prairie’s sod with a three-horse team.  A farmer could break the dense sod with amazing efficiency.  One man and his team working for only two months could have an “eighty” (eighty acres) broken and planted with sod corn.  Even though it might be years before the grassroots had completely rotted and the soil became rich, smooth, loam, it was well worth it for farming.  Even though these new technologies made some of the most productive land in the world available to farmers, it also marked the end of the Iowa prairie.  By the beginning of the 20th century, the Iowa prairie was essentially gone.  Though the 30 million acres of prairie in Iowa took thousands of years to develop, nearly all was converted to agricultural land in less than 80 years.        photos: top, earthromdom.com/ mid,cau250i

Soil is Iowa’s most precious natural resource.  The loss of this resource and the subsequent effects are the most serious environmental problems Iowans are faced with today. Our natural landscapes have been formed throughout geological history by erosion, but human activities have greatly accelerated erosion rates globally by removing native perennial protective vegetation and thus reducing soil stability.  In Iowa, alone, over 90% of its native prairies, forests and wetlands have been replaced by near monocultures of row crops and forages.   Most agricultural activities, especially on sloping landscapes, increase the potential for soil erosion.

How does erosion affect soil?  The most noticeable effect is the physical loss of top soil, including organic matter.  Three things happen during erosion – soil detachment, movement and deposition.  The rate and magnitude of erosion by water is controlled by the following factors:  1) rainfall intensity and runoff, 2) soil erodibility or the resistance to erode based on its physical characteristics.  Generally, soils with faster infiltration rates, higher levels of organic matter, and improved soil structure have a greater resistance.  Sand, sandy loam and loam textured soils tend to be less erodible than silt, fine sand and certain clay textured soils, 3)  slope gradient and length – the steeper and longer the slope, the higher the risk for erosion. Slope length increases erosion due to a greater accumulation of water, and 4) vegetation and residue that protects the soil from raindrop impact and splash and slows down the movement of surface runoff and allows excess surface water to infiltrate.  Three noticeable effects of the above are sheet erosion, or soil movement from raindrop splash and runoff that occurs uniformly over a field, rill erosion that results when runoff concentrates forming small yet well-defined channels, and gullies, which are larger than rills and are usually large enough to be a nuisance in normal tillage.

How does erosion affect crop production?  The above paragraph describes the physical loss of soil during erosion, but did you know that erosion seriously impairs crop productivity and yield?  An article in “Integrated Crop Management” by Mahdi Al-Kaisa, ISU Dept. of Agronomy, states that losses include physical and chemical properties such as infiltration rate, water holding capacity, loss of nutrients needed for crop production, and loss of soil carbon. When soil erosion is severe, soil erodes faster than it can be naturally renewed. For most areas of Iowa, the loss of one inch per acre of topsoil represents approximately 167 tons per acre and approximately 30 years is required to develop 1 inch of soil with properties of typical topsoil.  Most Iowa soils (those formed in permeable parent materials with favorable soil characteristics) can experience soil removal rates of 2 to 5 tons per acre per year.  Even limited soil erosion can be harmful to productivity in other soils.  Those with little rooting depth potential, slowly permeable subsoils, and fragile soil structure, or those that are shallow to bedrock or course sands or gravels, definitely are adversely affected by erosion.  No amount of management can compensate for the lack of suitable soil material.

Soil fertility is also vital to a productive soil, but fertile soil is not necessarily a productive soil.  The majority of organic material and approximately 50 percent of plant-available nutrients are concentrated in the topsoil or top horizon of the soil profile.  Losing this topsoil to erosion contributes to a decline in potential crop yield.  Productivity lost by excessive soil erosion cannot be restored with additional inputs when soils have subsoil material with unfavorable physical and chemical properties for plant root growth.

We must ask ourselves, “How much lost production potential can we tolerate and how long can we tolerate the existing trend in soil degradation?”  Even in the 1930’s, Franklin D. Roosevelt could see the writing on the wall when he proclaimed that “The nation that destroys its soil, destroys itself.”

In past articles, we have discussed soil erosion and its on-site detrimental effects on crop production, value of land, and actual soil degradation.  Most of us not living or working in a rural setting do not experience or observe erosion of top soil from fields, whether it occurs during a slow, gentle rainfall or during intense rainstorms.  The implications of soil erosion by water extend well beyond the removal of valuable topsoil and nutrients. The movement and deposition of both come from a number of sources and actually cause the most serious non-point source pollutants in the state.  The off-site impacts of movement and deposition of soil are often not as apparent as the on-site effects.  They do, however, cause significant damages and impairments to Iowa’s waters and subsequent high societal costs.  These include the reduced quality of recreation and fish and wildlife habitat, the obstruction of stream and river channels, the filling in of lakes and reservoirs, and the general degradation of water quality, including that used for drinking water.

What is Sediment?  Sediment is the soil material that is moved by surface runoff after being detached from surrounding material. This material can be discharged from various sources including agricultural fields, stream banks, construction sites and other highly disturbed areas.  It includes silt (fine particles) and suspended solids (larger particles).  Silt is a solid, dust-like material that is larger than clay, but smaller than sand.  Individual silt particles are so small that they are difficult to see, often causing turbidity in water and yet, when accumulated along a river bank after flooding, are easy to see.  The larger materials can be as small as sand and yet as big as large boulders, depending on the energy or velocity of the water moving this material.

The transport of these materials through the landscape is rarely continuous.  Instead, we find that particles may undergo repeated cycles of transport and deposition (repeated movement and deposition of materials during the alterations of high and reduced velocities of water).  Unlike dissolved loads such as silt, the size of the particle that can be carried as suspended load is determined by the velocity of the water.  As water flows faster, it can carry larger and larger particles.  Velocity can be reduced locally by the sheltering effects of rocks, stands of vegetation, leveling of slopes, or when narrow, moving water flows into an impoundment such as a reservoir.  When the velocity required to transport certain sized materials, is reduced, the materials are deposited and are no longer suspended.  If you have spent any time along a river or stream, you have noticed sandbars and even larger rubble deposits along the inside of curves of meandering channels, or downstream from snags, all deposited materials.

As has been discussed, all rivers and streams contain sediments.  When a river is stilled behind a dam, the sediments it contains sink to the bottom of the reservoir.  The portion of a river’s sediment load captured behind a dam is called “trap efficiency.”  As the sediments accumulate in the reservoir, the dam gradually loses its ability to store water for the purposes for which it was built – flood storage, recreation, or for fish and wildlife use.  The rate of reservoir sedimentation depends mainly on the size of water backed up relative to the amount of sediment flowing into it.  A large reservoir on an extremely muddy river may rapidly lose capacity while a small reservoir on a very clear river may take centuries to lose an appreciable amount of storage.  The amount of sediment carried into a reservoir is at its highest during floods.  Commonly, half of a river’s annual sediment load may be transported during only a few days of high flow due to high precipitation events upstream.

Most modern dams are designed so that they can afford to lose some storage capacity without impairing their performances – the part of a reservoir known a “dead storage” which lies beneath the elevation of the dam’s lowest outlet.  This loss, though, can negatively affect recreation and fish and wildlife habitat.  Sediments, however, do not accumulate evenly along a horizontal plane, so that some “live storage” is usually lost before the dead storage is filled. The actual process of sediment deposition is unique to every reservoir and is impossible to predict accurately. In general, the courser, heavier sediments like sand and gravel, tend to settle out at the upper end of the reservoir and can form a backwater delta which gradually advances toward the dam.  Lighter sedimentations such as silt and clay, tend to be deposited anywhere in the reservoir where water velocity is reduced to near zero.

Sediment is Iowa’s largest single non-point source pollutant and the primary factor in the deterioration of surface water quality in the United States.  It can originate in all corners of every county in the state and can travel and impact the length of our border rivers and every waterway in between.  In future articles, we will discuss the impact of sediment to Iowa’s major reservoirs and the future consequences.

This entry was posted in Uncategorized. Bookmark the permalink.