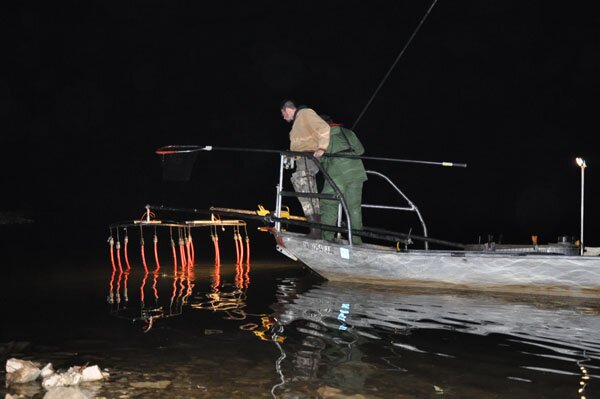 You may have seen some lights and a strange looking boat on Roberts Creek. Ben Dodd and Andy Otting of the Iowa DNR Fisheries division and Matt Kissinger of the Red Rock Lake Association visited Roberts Creek to do a followup on the release of Walleye Fry that were released into Roberts Creek in early spring. Over the course of several hours, they moved along the banks of the lake in the evening with their boat, lights and shocking equipment to sample the fish in the area.

Each fall, the Iowa Department of Natural Resources is authorized to request a two-foot lake raise at Lake Red Rock for waterfowl migration; however, due to continued drought conditions, there is not enough water in the system to accomplish the raise this year. Boaters using upstream portions of the lake should be aware of mud flats, shallow water and changing wind conditions.

Would you like to learn about what Lake Red Rock has done in the past? Through the archives page, you are able to view previous “Ask the Corps” questions, past projects, and past events.
Bald Eagle Days was a success!

On Saturday, March 3, Central College hosted this year’s Bald Eagle Days festival. Conservation, naturalist, and other various outdoor groups from the Midwest area came to present a variety of information on birds of prey and other wildlife. Around 1200 people attended from 44 different communities! Those who attended were able to get an up-close look at a live bald eagle and other raptors. Activities included the Pella Wildlife Company’s live bat show, wildlife photography by Ron Huelse, information about the new eagle nest cam at Red Rock, kids craft activities, and an “environmental fair featuring environmental groups, agencies, and other venders.

On Saturday, January 22, the Red Rock Lake Association hosted their second annual “Red Nose Ice Fishing Tournament” at Roberts Creek. The weather was cooperative and so was the ice: thickness ranged from 10-18″ thick for the anglers. The Lake Associationpartnered with areabusinesses to provide a variety of prizes in different categories, and they also partnered with “Outdoors Dan,” a local radio personality, to help promote the event. The Lake Association’s efforts paid off: 131 two-man teams were registered to participate in the activity. Fishing was ore successful this year, with more fish being caught: A total of 2,418 fish were caught and released.