Are River Otters doing well at the lake?

It’s not always easy to spot river otters, but their population is health at the lake and their reintroduction in the 1980′s was successful.  With this year’s mild winter, it’s been especially hard to view them since they are very mobile and the lack of ice cover on ponds makes it hard to locate specific entrance and exit spots for their activities.  The Red Rock area provides ideal habitat for the semi-aquatic species.  Local conservation officers have reported receiving many calls from private landowners about otters in their private ponds.

According to Pat Schlarbaum, Wildlife Diversity Technician with the Iowa Department of Natural Resources (DNR), otters have become established on every major waterway in the state.  Their numbers are sustaining limited harvest, so they are with us as renewable resources that few would have predicted 30 years or even 20 years ago.

Otters are members of the Mustelidae family, and they are related to weasels, badgers, minks, skunks, fishers, ferrets, and wolverines.  By the mid-twentieth century, otters were extirpated from large sections of the central and western United States and became rare where they still existed.  In Iowa after about 1890, otters only existed along the Mississippi River. Unregulated trapping and hunting and loss of habitat caused the otters’ demise.  Conflicting agricultural activities and stream pollution eliminated otters from interior rivers of Iowa by 1929.

Like bald eagles and peregrine falcons, river otters sit at the top of their food chain and experience a drop in reproduction rates when pollutants collect in their tissues.  Thanks to provisions of the Clean Water Act, Iowans are now providing a better environment for both humans and wildlife living along watersheds, and otters can once again thrive in Iowa waters.

Otters were introduced to Red Rock(near Runnells) as 16 animals in 1985.  Through a three0way wildlife trade, otters from Louisiana were acquired for Iowa by Kentucky.  Kentucky, in return, received Iowa turkeys.  The otters had transmitters inserted into their body cavity , and 15 of them survived the first year.  They moved in with beavers in their lodges and ate a lot of freshwater drum.  The Red Rock otters survived, so the DNR introduced 60 more of them in 1986 to Otter Creek Marsh (Tama Co.), Springbrook (Guthrie Co.), and Colyn (Lucas Co.) in southern Iowa.  There were a total of 11 release sites around the state from 1985 to 1998.

By 1990, 11 areas had become the home to 222 Louisiana River Otters. The sites included the previously discussed Red Rock Reservoir in 1985, Otter Creek, Boone Forks, and Springbrook in 1986, Peterson and Lake Rathbun in 1987, Sweet Marsh, Waubeek and Morton Mills in 1988, Otranto in 1989 and 1990, and Mason City in 1990.  In 1997, otters were released at Indian Creek Nature Enter in Linn County and at Chichaqua Wildlife Area in Polk County.  In late 1990′s, iowa trappers relocated over 100 otters that had been caught incidentally while pursuing beaver and raccoons.  These animals were released into watershed that had not been stocked to improve otter distribution across the Iowa landscape.

Once the otters acclimated to their new surrounding, their shy and elusive nature became apparent and sightings became less frequent.  Otters are mostly nocturnal, but come out during the day on occasion.  If you are wantng to see them during daylight hours, the best time to try and spot them may be during the morning hours.

Many wildlife professional believe otters would not have flourished in Iowa without the standards set for clean water in the Clean Water Act of 1972.  The presence of otters is an excellent indicator of the improvement in Iowa’s water quality.  Further improvements will enhance the quality of human lives as well.

If you are hoping to spot an otter at Red Rock, try watching for them by the pond near the Moingona Prairie, about a mile south of the dam off County Highway T-15.

What is the status of the whitetail deer population around the lake area?

Information on deer population trends is not specifically available for Red Rock, but data is tracked for each county and posted on the DNR’s website (see website link later in this article). According to Rick Trine, Iowa DNR Wildlife District Supervisor, data for the 2011/2012 deer harvest is still being tabulated, but early results show that the number of deer harvested was down 9% statewide, and it was down 26% from 2006.  While this is the overall trend, several counties in Northeast and Southern Iowa are still tracking higher deer populations.  The full report for the season show be completed between March and early May.

Aerial surveys are completed annually after a fresh snowfall event (and with a base of snow already on the ground).  Two DNR Wildlife staff travel with a pilot along established routes called transects.  These same transects have been used for about 30 years in order to record data as consistently as possible.  Pilots fly as low and slow as legally possible in order to count deer.  The animals show up easily against the white background of the snow.  Wild turkeys are also counted during the surveys.

Spring spotlight surveys are completed in the spring before leaf-out.  Established 25-mile routes are used each year for consistency; however, routes may be periodically added or phased out over time.

So, how many deer are there in Iowa? The Deer Study Advisory Report (dtd. Jan. 2009) states, “It is not feasible to precisely determine the actual number of deer in the state.  Instead population surveys are used as indexes to evaluate where deer number currently are compared with the goal…”Management in Iowa may be characterized as trying to maintain a balance between the public’s demand for hunting and viewing opportunities with a need to keep deer numbers compatible with agricultural interests, highway safety, and habitat limitations.”

When the harvest data is tabulated and the surveys are complete, the DNR will determine whether deer numbers are at manageable levels.  If increases or decreases are needed, the DNR will adjust the number of antlerless-only licenses available during the next hunting season.

For more information on deer population trends, check out the DNR’s website here.

The Lake Red Rock area has over 30,000 acres of public lands available for hunting.  To view a printable map click here.

What is the status of the Red Rock Dam?

The Corps is currently in the middle of a $6 Million contract to retrofit the dam for a new bulkhead system for the dam’s flood (tainter) gates and renovate the gates’ existing mechanical systems.  This complicated contract has been underway since November 2010 and is expected to continue for several more months.  The retrofits and machinery work are accomplished in various phases, some of which take place on location at the dam while others happen off-site in a factory setting.  The tainter gate machinery parts must be removed by cranes and taken off-site to accomplish the work.  To keep the dam operational, only one or two sets of machinery are removed/refurbished at any given time to ensure some of the tainter gates are always available if a flood situation occcurs.  Every time section of machinery are removed or are reinstalled after renovation, the road is closed during the process.

Construction crews are often involved in working on both the lake side (for the bulkhead work) and river side of the dam ( for tainter gate machinery work). They often utilize cranes with outriggers and other heavy equipment that is not easily moved during “off work” time periods.  The equipment is also often located in one or both traffic lanes during construction.

The dam road is basically a construction site during road closure time periods.  For the safety of the work crews and the public, both lanes of the road are closed and a detour route is required when work is underway.  During off-site/factory phases of the contract, the Corps reopens the dam road.

What is the Status on the Fishery at Red Rock?

As a special perk of your support, we’re providing you this sneak peek at the next “Ask the Corps” article (published in the Pella Chronicle and Knoxville Journal-Express).

A very common question heard by lake staff is “Where can I go to fish?” Whether by shore or by boat, landing those big lunkers at Red Rock can offer a mix of successes and challenges.

According to Ben Dodd, Fisheries Biologist with the Iowa Department of Natural Resources, “The spring flooding has made angling for the large, white crappie in the tributaries (like Whitebreast Creek) difficult for some; however, angling for black crappie has been pretty good around the docks in the marina and in Roberts Creek. We have noticed very good bluegill and crappie numbers and growth rates over the past few years in Roberts Creek. This may be due to the high water levels, which inundates additional habitat and food resources.”

Fishing for walleye? These game fish may a bit more difficult to catch. Dodd said, “It’s difficult to keep a consistent walleye fishery in Red Rock (flood control reservoirs in general). They tend to move through the spillway, and this becomes more of an issue when large flows are being released (like those that have occurred the past several years with the flooding).”

As reported in a previous newsletter, the DNR added rock “fish reefs” along the shore at the end of County Highway S-71 (by Whitebreast Campground) and along the shoreline of the Marina Cove Recreation Area. Marion County Conservation Board staff also place Christmas Tree structures in the Creek and along a section of the lake’s shoreline west of the dike for fish habitat.

Grab your fishing pole and give the lake a try!

Why is the Corps of Engineers clearing some of the woodlands around Lake Red Rock?

Red Rock is working to control invasive species in our woodlands, prairies and old fields. Invasive species can be plants or animals that rapidly colonize sites and displace other species. They can be native to an area or introduced from other places in the world. By far the most insidious and detrimental invasive species are non-native, exotic species. Control of exotic species is arguably the most important challenge facing resource management agencies and private landowners today. 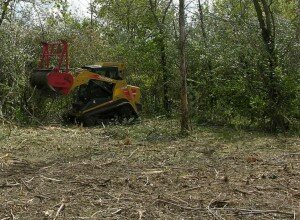 For example, two species that Red Rock Project is most aggressively trying to control are autumn olive and Asian honeysuckle. These shrubs were formerly considered valuable additions to tree plantations and wildlife shelterbelts. Their merits include providing dense cover and producing ample fruits. It was common practice in the 70′s, 80′s and 90′s to include these shrubs in plantation or shelterbelt design. Both autumn olive and Asian honeysuckle’s native, natural range is in Asia. Unfortunately, these species did too well in their “new” environments. Left unchecked, they can dominate a site and displace the native flora and cause a detrimental decline in fauna as well. 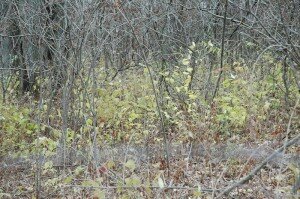 By removing these species Red Rock intends to stimulate prairie and grassland communities, both of which have dramatic declines in recent years. As a consequence, many grassland wildlife species, ranging from invertebrates to mammals and birds, are having disastrous drops in population. Likewise, dense understory of exotic and shade tolerant native species prevent adequate oak regeneration in woodlands. Broadly and generally speaking, this in turn leads to a poor quality forest and poor wildlife habitat. Not all alien species are bad, and not all native species are good; however, there is great risk anytime a non-native, exotic species is introduced into the environment. 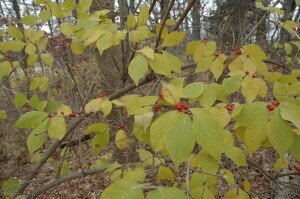 It is our goal to manage our natural resources for the best possible outcome to benefit sustainable communities for Iowa’s native plants and animals. It’s a daunting yet critical task for our environment. Contact the Red Rock office for more details about Red Rock’s natural resource management.