The Corps of Engineers at Lake Red Rock will begin accepting reservations at the Howell Station Campground beginning on or about May 1. The park will still contain a select amount of first-come, first-serve sites as in past years. For reservations, contact the National Recreation Reservation Service at 1-877-444-6777 or on-line at www.recreation.gov.

On Thursday, April 14, Howell Station Campground opened for the recreation season. Due to replacement of the park’s sewage lift station, campsites are still first-come, first-served; however, the camping reservation restriction shall be lifted once the new sewage lift station for this area passes a two-week operation test.

Due to ongoing flood repairs, Ivans is closed until further notice.

The old observation deck (built in the mid 80′s) was in such poor repair, it was closed for safety reasons. The vantage point it offered was missed by many guests to the area. Therefore we added some temporary bracing to make it through the 2008 summer season.

By partnering with local organizations, we were able to create an observation area off our visitor center to reinstate the great view of the lake and dam. After gaining excitement about what the lake area has to offer while inside the visitor center, guests can now come out to the observation area and take in the beauty of Lake Red Rock. This area also offers our ranger staff and volunteers an appropriate place to educate on construction of the dam, lake facts, native vegetation and recreation. Other visitors use this area for birdwatching, picnicking, relaxing and taking a photo to remember their vacation. All of these contributing to a strong guest connection to Lake Red Rock, resulting in incremental visits to the area.

We want to thank all of the partners who helped make the observation deck a reality:

In an effort to add fish structure around the lake, the Iowa Department of Natural Resources recently built several rock “reefs” along the shoreline by the Whitebreast Recreation Area. Fishermen should be able to access these areas by boat and on foot to catch some big lunkers for the frying pan. The reefs in the photo above were constructed along the eastern shoreline at the end of County Highway S-71. Once the drawdown process is completed and the lake is allowed to return to normal level, the reef will be submerged five feet below the water’s surface.

The DNR is considering adding reefs at other locations, but projects will be dependent on what remaining state funds are available after the Whitebreast reefs is completed.

The US Army Corps of Engineers will draw down the reservoir ten feet in the fall of 2010 to dewater the tainter gate bays. The tainter gates serve as the emergency spillway for the dam and are lifted up and down by cables. During the flood of 1993, several of these cables snapped.

All the cables were replaced immediately following the flood and put on a 15-year replacement schedule. At the conservation pool elevation of 742 feet above sea level, the cable attachment brackets are permanently submerged. The lowered reservoir level will allow direct access to the brackets.

The U.S. Army Corps of Engineers at Lake Red Rock has reached the ten-foot drawdown and work on the dam has begun.  This past week a barge was assembled on the lake to assist with work on the dam.
The drawdown allows the tainter gate bays to be dewatered.  The tainter gates serve as the emergency spillway for the dam and are lifted up and down by cables.  During the flood of 1993, several of these cables snapped.
All the cables were replaced immediately following the 1993 flood and put on a 15-year replacement schedule.  At the conservation pool elevation of 742 feet above sea level, the cable attachment brackets are permanently submerged.  The lowered reservoir level will allow direct access to the brackets.

To view more information on the draw-down click here.

Over the last two months, contractors have been preparing to replace the Red Rock Dam’s tainter gate lifting cables. They have also progressed on the first steps to install a new bulkhead system. Efforts to date have involved smoothing/preparing surfaces of the dam to creat good seals for the bulkhead and creating a new underwater ledge for it to rest on when in use. A large portion of this work occurs underwater, which requires close coordination with the dive team and Corps of Engineers staff.
The crane involved in heavy lifting tasks earlier this month has temporarily left the work site. Highway T-15 over the dam remains closed because additional equipment arrived today (Nov. 16) to pump concrete and complete other aspects of the project. The $4.4 Million contract is being paid for by 2008 Flood Recovery funds. The company awarded the contract for the effort is Kovilic Construction from the Chicagoland area.

As part of the recovery work from the Flood of 2008, contractors from Park Construction Company from Hampton, Minnesota have been placing rip rap (large rock) along the shoreline in North and South Tailwater parks to prevent shoreline erosion from river currents. Minor concrete/grouting work has also been underway in those areas. The project was initially slated to begin last fall; however, due to high dam outflows/river levels, the contract was delayed.

Work is almost complete. The remainder of the effort includes grouting under fishing access stairs/sidewalks and placing rock around the bike bridge abutments. 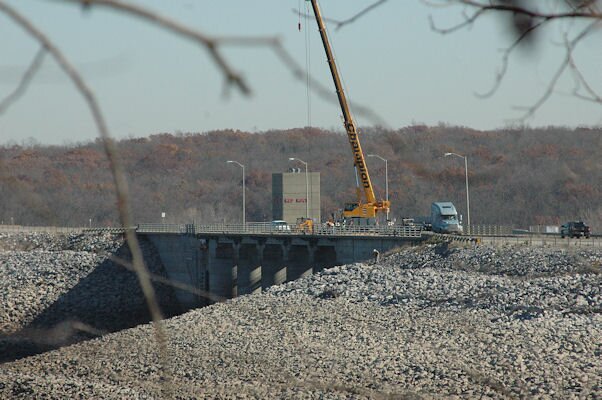 This fall, the U.S. Army Corps of Engineers, Rock Island District, reduced Lake Red Rock’s reservoir pool level to elevation 732 mean sea level from 742 msl in preparation for flood recovery work. This drawdown was made to expose Tainter gate cable attachment hardware, which is underwater at normal reservoir levels, to enable replacement of the lifting cables. The ten-foot drawdown was originally scheduled to be completed in mid-December. However, due to a contract modification for cable replacement, the drawdown has been extended to February 12, 2011. 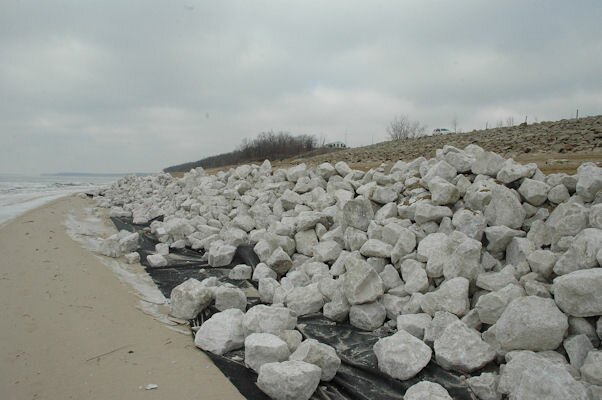 The Iowa Department of Natural Resources (DNR) recently added rock “reefs” to improve fish habitat along the Marina Cove shoreline. The reefs are currently visible below the main parking lot for the boat ramp, but they will be submerged oce the lake returns to normal conservation pool. This is the second reef project accomplished recently by the agency. 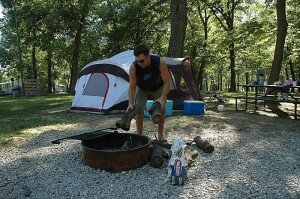 The Red Rock Lake Association will be offering firewood for sale in the Howell Station and Roberts Creek West Campgrounds this recreation season (Memorial Day to Labor Day). Wood will be sold in bundles for $5.00 each. This new amenity is being coordinated through an agreement between the Association and the Corps of Engineers, Marion County Conservation Board and a local wood supplier. If the first year’s test is successful, the Association may consider expanding the service into other lake area parks.