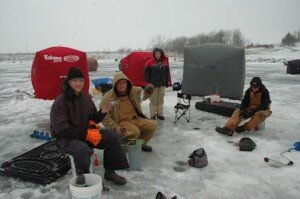 For Information and to register for the upcoming 2013, 3rd Annual Red Nose Ice Fishing Tournament, postponed due to open water, now Schueduled for Febuary 9th at Roberts Creek please click on the link below: 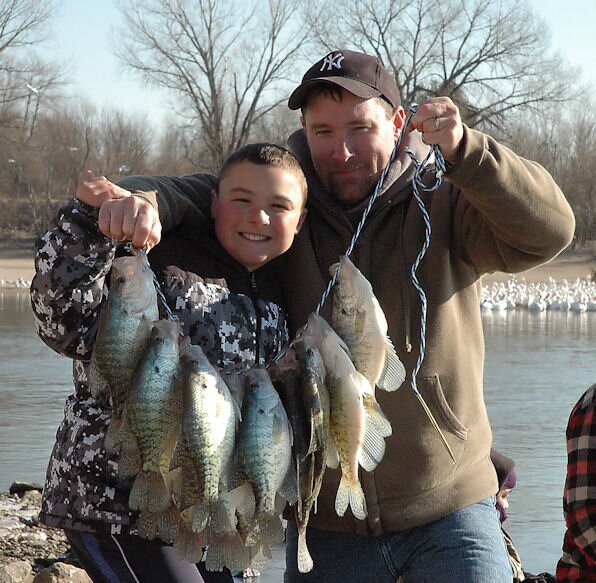 Gary Hockey and his son Dylan caught a nice string of crappies on Saturday, November 27 while fishing from the North Tailwater Recreation Area.  According to Gary, most of the fish were caught by Dylan, who seems to be quite a talented (or lucky) angler!  Tube jigs were one of the tackles of choice for their success

Nine year old Nate Kissinger, a student at Madison Elementary in Pella, reeled in a 45 inch, 45 pound catfish below the Red Rock dam Thursday night. Nate and his father Matt went fishing around 6:30 pm. According to Matt, he baited a treble hook with a worm for Nate, and added a bobber to avoid snags. The current kept driving the line back into the rocks, but the boy kept recasting. Nate told his dad that he thought he had caught a snag, but Matt thought it odd he was reeling in line. Finally, a huge tail slapped the water, and Nate said “Dad, I think I have something,” as the fish began running, almost pulling Nate into the water. Nate was using an 8ft surf rod with 50lb test, and the father and son were able to bring the fish to shore after about an 11 minute struggle.

“Four Knoxville men went fishing for catfish below the Red Rock Dam [in May] and instead reeled in a huge, and possibly rare and ancient fish after a nearly two hour struggle.”

Types of fish you can expect to catch:

At Lake Red Rock you will find plenty of fishing spots and a variety of fish!